Personal exhibition of Garo Keshishian, at Synthesis Gallery in Sofia 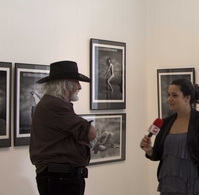 The event is supported by the Foundation Sergio Poggianella, Italy, which has lent 70 photos of the artist Garo Keshishian. The exhibition is organized by Academy of Photography “Janka Kjurkchieva.”for the seventh edition of the Month of Photography.

Born in 1946 in Varna, on the Black Sea, Keshishian has devoted himself to photography since 1976. A committed artist, one of the greatest photographers of Eastern Europe: numerous awards that have been attributed to him in European Union countries and in the United States and in Japan.

For thirty years he has stolen photos recalling the social unease of the people living in his land, in the difficult passage of Bulgaria from Soviet influence to Western-style democracy: Gypsies, military workers, steel workers, and who, just for a photo, accidentally landed in his studio in Varna.